Books, to read, to write, to collect and to love. I am a school librarian - the best job in the world, for leisure reading it is often golden age crime fiction, but in truth I'll read most things - but not horror or football (which is another kind of horror, isn't ?).
863 BOOKS

A Great Beginning to a Great Series 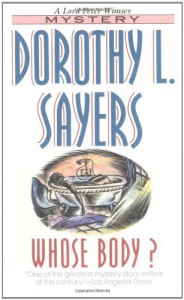 Lord Peter is introduced as nervy, edgy and insightful. Frustrated and bored, definitely suffering from shell shock. He needs an occupation to distract him from the nightmares - being a private detective, fulfils his wants although the conclusion is something he would prefer to avoid.

Bunter, the near perfect butler - too perfect sometimes? Discreet and no doubt pleased to be given such a secure position in a world burdened with unemployed ex-soldiers. He is allowed to develop his own interests and Wimsey is interested in him up to a point.

I nearly always prefer the detective stories written at the time in which they were set at the authors get the details of attitudes, morals and mores right. This sometimes leads to characters expressing inappropriate sentiments, but there should surely be a case for accepting these attitudes for what they were: the contemporary depiction of society - if all the characters had been without these opinions then they would not be of that time and background. It is interesting to see that there are subtleties of opinion where personal knowledge is reflected in the adjustment of these attitudes and opinions.

This is well worth reading if you enjoy detective fiction written and set in the early 1920s, that is mostly concerned with the upper echelons of society. It is very well written by an intelligent author who assumes her readers are her equals and is long enough to become really absorbed, but not too long.

You probably guessed - my favourite author. This is the long waited final instalment of this series. Those buying it for younger readers should be aware that it is definitely aimed at older youngsters than the Alex Rider series. This final book has scenes of explicit and disturbing violence, more than the anticipated beatings, so be aware.
The story is told from the points of view of a number of the main characters, principally the five but also others. This helps to break up what is an extremely long book. That is probably one of my criticisms, it is really too long. Presumably Anthony Horowitz also understands this because as each character takes up the narrative there is a short reminder of what occurred the last time they were narrating.
The story is very exciting, intended to be many layered, a bit too keen to be didactic and moralistic. Horowitz also seems keen to demonstrate his anti religion stance. I didn't really like the end, but will be interested to see what others think. I think that the book has been written to be adapted into a film, not a criticism but an observation.
I enjoyed the different depictions of a post apocalyptic world, they were credible, although London was weakest as if there was a need to get on at that point with the story. In fact on reflection there are a few points when the story feels it has run out of steam or as if like in centuries gone past a painter allowed an apprentice to work on famous paintings. Part of this book has that same feeling that small parts have been handed over to other lesser writers.
However, all the ends are tied and at least there is no doubt that this is the end if the series.
Tweet

The Middle of Things This book was hard to place historically, because although there were motor cars. The women in the story are not exactly rounded characters and the poor aunt is like an exhibit in a freak show for having a perceptive mind, although in truth manages to unravel most of the mysteries single-handed.
I agree the ending was deeply unsatisfactory.
Tweet I really tried to see something positive in these stories and the best I can say is that Lady Molly was very lucky to have the slave like devotion of her maid Mary who never saw her for the over precious detective who worked almost entirely on intuition and probably put back the cause of women as equal humans for 50 years. Maybe a bit unkind, but really a very irritating pair of women!
Tweet

A Grave in the Cotswolds This is the kind of book the kindle and other e-readers was made for. I started off buying this series, but have gone off them more and more. So now selling the physical copies, to make room for those I want more. I will probably delete them altogether in the future, but can't quite bear to part with them altogether just yet.
Tweet

Death In The House The more of Anthony Berkeley's books the more I like him as a writer. He is naturally going to attract me as he wrote in the first half do the 20th century, my favourite time setting.
Tweet Could not get into this book and had lost all sympathy for the main characters by the end of chapter one! This is very unusual for me. All I can put it down to is that it was too introspective and the adults were even more dysfunctional than usual. I know he has to be isolated for the story to make sense but I just could not buy into the way it was done. I have read other books by BA which I have enjoyed far more.
Tweet

The Man in the Brown Suit I read this first of all when I was a teenager I wanted to be Anne, all those adventures, possibilities - this was and always has been one of my favourite books by AC.
Tweet

The Best Type of Girl: A History of Girls' Independent Schools

In my opinion a really useful book and great for researching details of girls lives, at least those who went to independent schools. I write books, often set in the 1920s, and I have found this book to be one of the most helpful in setting the scene.
Tweet Too weird for me, but I can see it would appeal to those who like fantasy/science fiction. So if you are one of those then try it!
Tweet One of my top ten Agatha Christie books, I have a soft spot for Tommy and Tuppence, but that aside, this story has an interesting premise. It is truly difficult to decide which of the characters is not what they appear to be. I will say no more as it is too easy to spoil this story.

After the Armistice Ball: A Dandy Gilver Murder Mystery I thought this was one of the best crime novels I have read that has been written in the last 20 years. I find it extremely satisfying that not only is Dandy a good detective, but that she thinks as someone living through the post-war period would have been likely to. Ms McPherson has drawn excellent 3D characters and although I knew nothing about Scotland (either in the 1920s or even much now) before reading this series I felt that I had gained an insight into that society at that time. One other thing that is great is the nature of the relationship between Dandy and Alec.

If you enjoyed Dorothy L. Sayers then I like to think you would enjoy these - they are not the same, as that would be too boring, but they are intelligently written, the outcomes are feasible and it is hard waiting for the next one in the series.